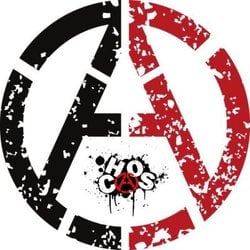 The Anarchy token and its ecosystem aims to become the home of anarchists all over the world embracing the power of blockchain to initiate economic freedom; a place to realize this ideological vision through crypto. By buying, holding, and even using anarchy and its ecosystem tokens, WE CAN change the world. With Anarchy, all are invited to transform ideas into reality to influence the traditional world. Holders of every coin should join anarchy in this movement.

Anarchy offers a blockchain office building for anarchists worldwide to combine efforts towards expanding our networks, reach, and community with the fundamental building blocks already created. All professions, skillsets, and minds that are called to Anarchy come together for the greater good.

"I die, as I have lived, a free spirit, an Anarchist, owing no allegiance to rulers, heavenly or earthly.” – Voltairine de Cleyre

There is no guarantee that In 5 years, ANARCHY would still even exist. Another faster and cheaper blockchain might capture the majority of developers, users, and capital. Or some critical failure of ANARCHY might derail its progress.

Because the probability of guessing the winner is low, it's better to use a portfolio approach and buy all possible contenders, including ANARCHY.