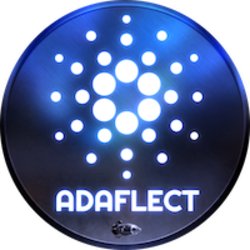 ADAFlect is designed to act as a shareholder token against the overall volume on the ADAFlect Network. Rather than reflecting native tokens, ADAFlect instead reflects back Cardano’s native ADA Token as made available via Binance-Peg. By doing so, ADAFlect holders can trade their profits against Cardano’s massive liquidity pool, without needing to place any sell pressure on the ADAFlect token. Coupled with the parabolic rise of ADA, traders can easily de-risk their initial investments, and hold ADAFlect to allow for passive earnings to continue building based off highly incentivized network activity.

As a final incentive towards overall safety in liquidity, 2% of the shareholder volume is directly placed into ADAFlect/BNB Liquidity, with any returned LP Tokens automatically being sent to the burn address; ensuring a constantly raised liquidity floor.

There is no guarantee that In 5 years, ADAFLECT would still even exist. Another faster and cheaper blockchain might capture the majority of developers, users, and capital. Or some critical failure of ADAFLECT might derail its progress.

Because the probability of guessing the winner is low, it's better to use a portfolio approach and buy all possible contenders, including ADAFLECT.